We’re all on constant voyage to better understand Windows Phone 7 and its delicate Consumer<->Developer balance. As part of that education I’ve download all Windows Phone 7 marketplace XAPs, performed analysis on them and am now sharing statistics with you.

Some of you must be thinking to yourselves “Self, how exactly did Justin download all WP7 XAPs? And is that ‘ethical’?". For the last year or so it’s been well known among WP7 developers that the WP7 marketplace API allows to freely download XAPs. By employing basic network profiling on the Zune Desktop client it’s possible to find the endpoints allowing users to download XAPs.

WPCentral did an article on the topic, and so has WMPowerUser. 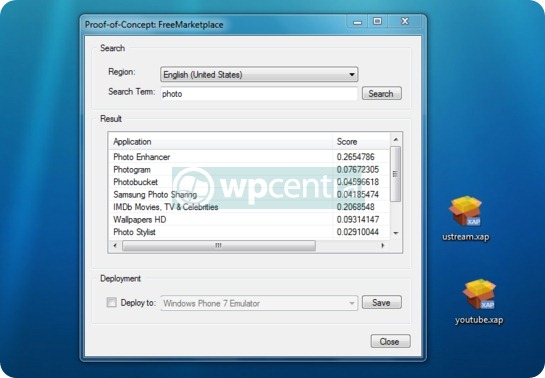 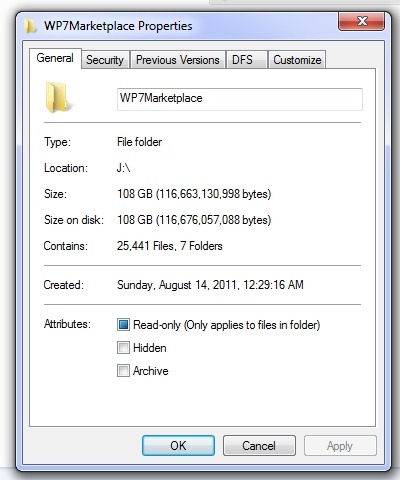 Is the Marketplace API permanently public?

No. Starting with Mango all WP7 XAPs downloaded from the Zune Catalogue are going to be DRM encrypted. So, Mid-August was a great time to start downloading the marketplace and perform freeform analytics. In the Mango versions of the Zune Catalogue XAPs are still downloadable, but cannot be explored since they’re DRM protected.

I suspect this blog post is going to be the first and last independent analysis performed by a 3rd party on the Windows Phone 7 marketplace.

Statistic #0: How Many apps in the marketplace?

We often here numbers on the quantity of the overall Windows Phone 7 Marketplace. Latest numbers shared on a multitude of websites called out 30,000+ apps in the WP7 marketplace. Unfortunately, I could not locate all these apps through the Zune Catalogue. That means that either everyone has the wrong number, or I did something wrong. 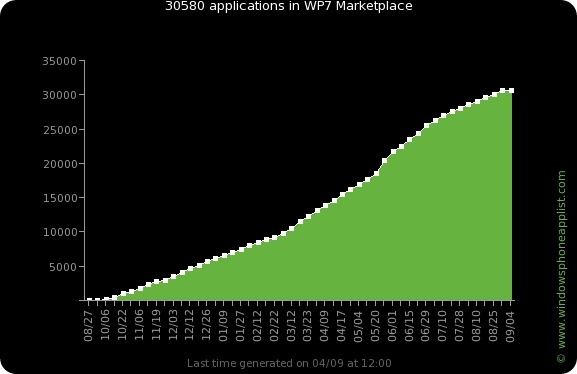 In this blog post we will only be analyzing 24,505 applications available on August 14th 2011. Those are either all WP7 apps, or these are hopefully a representative sample group of the entire WP7 marketplace. One option is that the WP7 marketplace has 6,000 apps than previously publicized by 3rd parties.

Since the current WP7 marketplace allows downloading XAPs you might ask yourself “Hey myself, Justin is making me uncomfortable. My apps aren’t obfuscated. Am I alone?”. Rest assured that you are in-fact not alone and 97% 85.5% of Marketplace apps aren’t obfuscated. For those unaware Obfuscation is essentially scrambling source code prior to shipping it with the goal of making it difficult to reverse engineer. Apps that are obfuscated would be significantly harder to reverse engineer.

The common (and only?) obfuscation tool for WP7 is DotObfuscator. The use of DotObfuscator often leaves files with the “DotObfuscator” brand in the final XAP. As a result we can easily iterate over all XAPs and see which one is obfuscated and which is not.

Update 10/3/2010: Sebastian Holst of PreEmptive has done a similar analysis to mine by downloading the entire WP7 Marketplace and found the real number of obfuscated XAPs to be 14.5% of the entire WP7 marketplace. Instead of looking for  XAPs with “Dotfuscator” files ,  Sebastian looked for the [DotfuscatorAttribute] in the app binaries.  That’s a significantly better metric to measure the total number of obfuscated apps in the WP7 marketplace. Read more about Sebastian’s analysis on his great blog post on the topic. 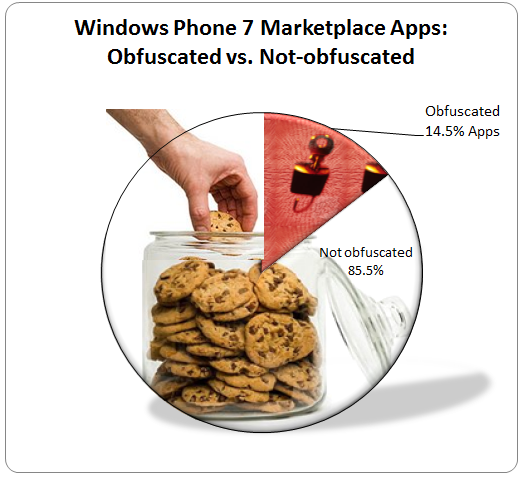 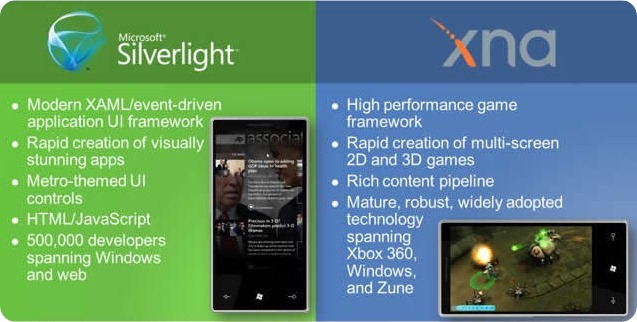 The question then arises, what’s the adoption of both technologies in the Windows Phone 7 Marketplace? 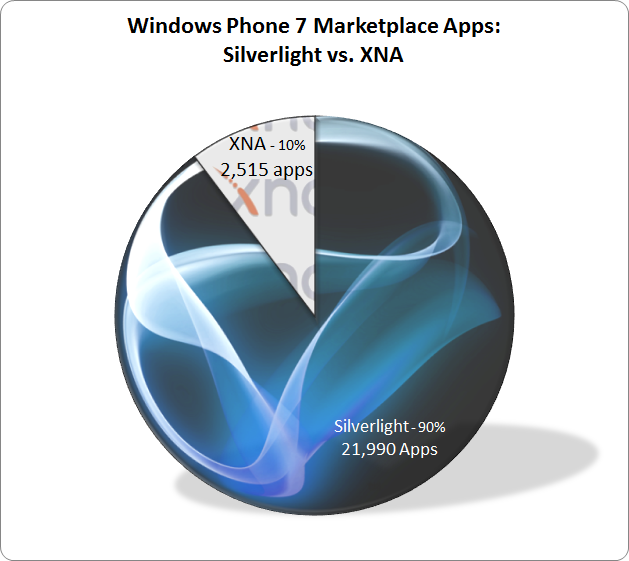 It’s important for me personally to note that this isn’t a victory or something to lord over XNA devs. XNA is an important piece of the WP7 ecosystem and a critical part of the consumer landscape. As a friend of mine anecdotally said “All the great informative apps in the world don’t matter if you don’t have Angry Birds”.

Ever since .net came into existence there has been a healthy tension between C# and VB.Net developers. By looking at which XAPs contain Microsoft.VisualBasic.dll and FSharp.Core.dll we can learn what programming language is used by WP7 apps. 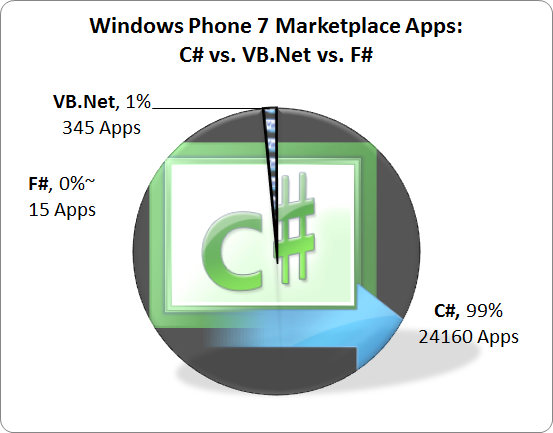 One possible explanation to this disparity between C# and VB.Net & F# is that the WP7 V1 tools didn’t officially support VB.Net and F#. While it was technically possible to develop WP7 apps with VB.Net and F#, it wasn’t supported as a project type in the default WP7 V1 developer tools installation. Mango developer tools will be shipping with full WP7 VB.Net support. With that, we’ll likely see am uptake in VB.Net WP7 adoption. I hope.

The following issue is a bit more complex to understand. There are a group of apps in the marketplace that are essentially the same app published multiple times with slightly different behaviour or data. In essence each XAP contains DLLs and if 2 XAPs have the same DLLs then they will be functionally quite similar. 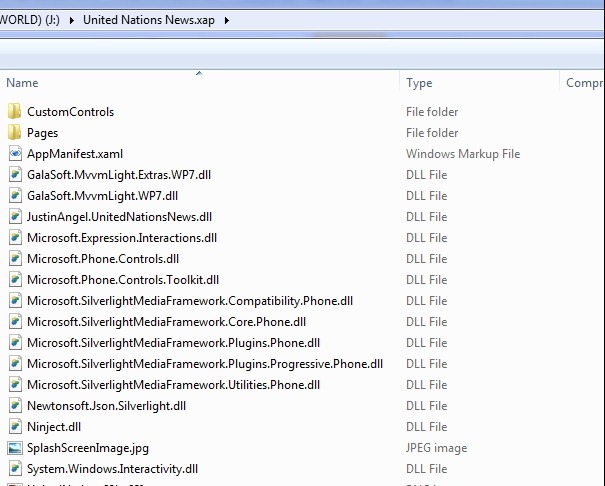 By comparing the contents of all Windows Phone 7 XAPs with each other we can determine which apps are “cloned” with some limited certainty. 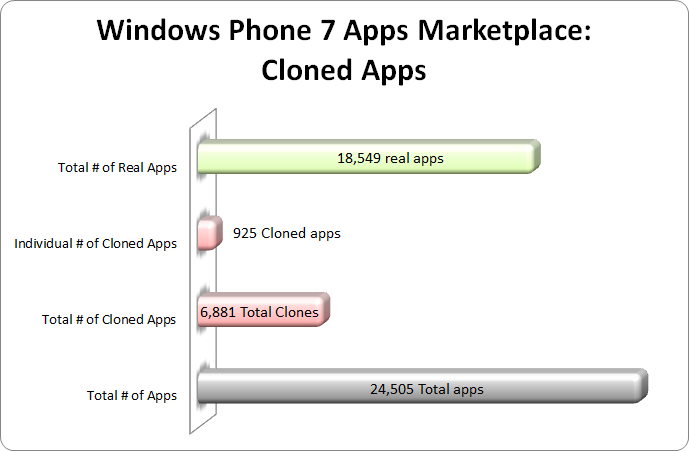 By counting each cloned WP7 apps just once, we can reveal that there are only 18,549 unique apps in the WP7 marketplace.

Let’s avoid a witch-hunt right here and now. There are perfectly legitimate reasons to clone apps. 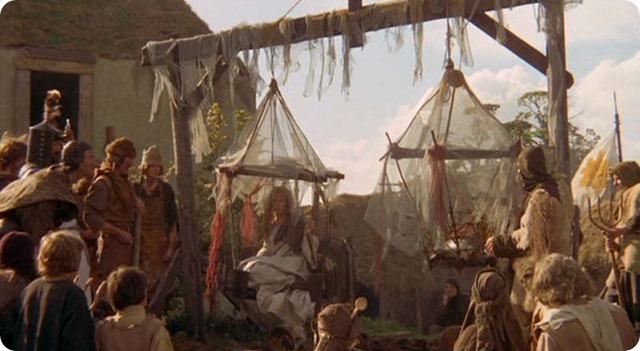 For a good example I point to the “Traffic Cameras” apps that does make sense to highlight their unique localization. The core issue is the lack of support in Mobile Marketplaces for the concept of app  “flavours”. 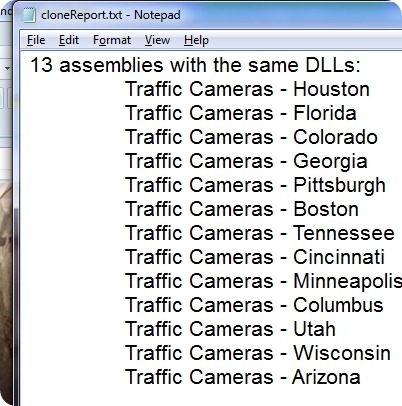 Side Note: “But Justin, What about iPhone? It’s magical!” 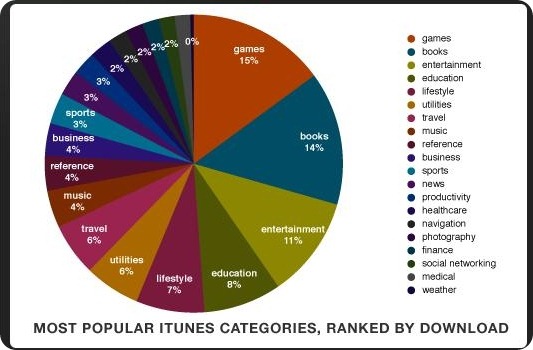 Note how the “Books” category takes up 14% of the iOS marketplace. That’s approximately 60,000 apps. Anyone thinking there are 60,000 kindle/ibooks competitors on iOS is on crack. These are all cloned apps.

Based on http://www.windowsphoneapplist.com/stats/ the WP7 “Books”category has the same 15% share as it has on iOS. 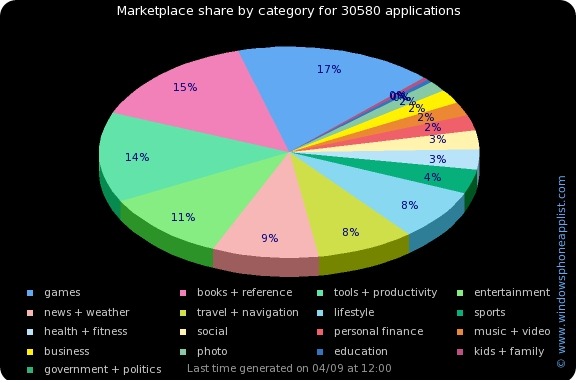 When looking at the entire Windows Phone 7 app landscape we get the rare opportunity to ask: Who contributes more? Single app developers or companies publishing 50+ apps? 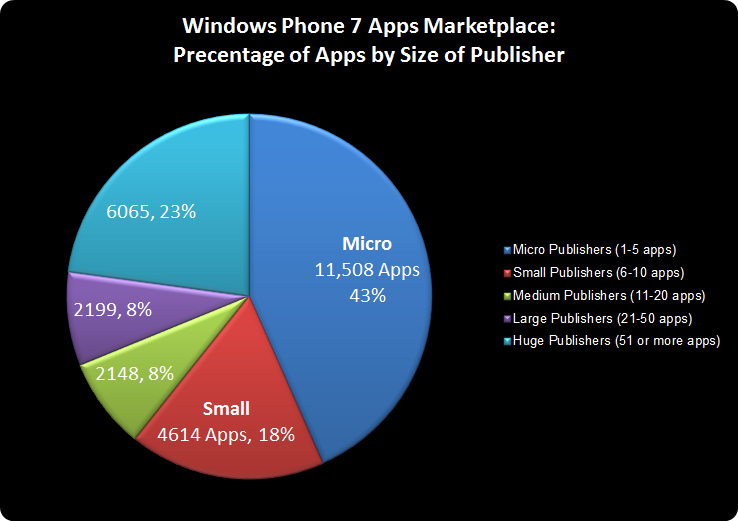 Well, the answer is surprising in terms of quantity The Micro-publishers and Small Publishers each publishing less than 10 apps account for 60%+ of the WP7 Marketplace size. The larger publishers only contribute 1/3 of the total size of the WP7 marketplace.

But in terms of quantity what is the relative contribution of each of publishers to the top 2000 apps? (hopefully measuring app quality) 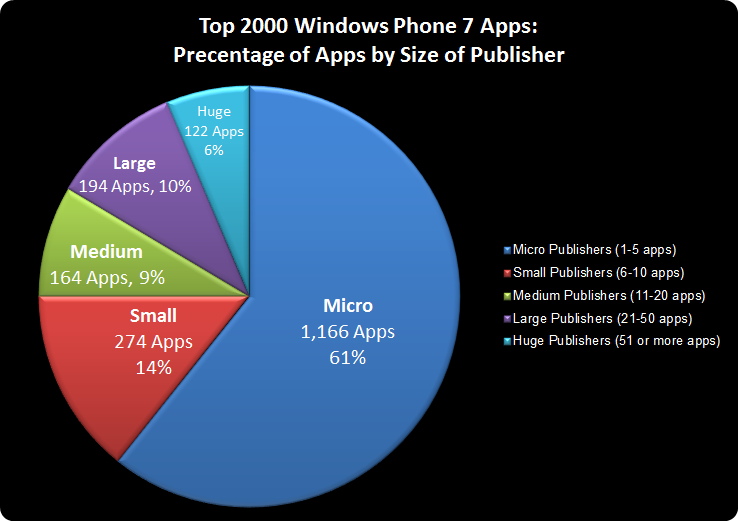 Exactly 75% of the top 2,000 “popular” WP7 apps are created by publishers shipping 10 or less apps. Proving once again that focusing in on a few defined objectives leads to better overall quality.

Another interesting developer question that could only be answered from inspecting XAPs is: Who Da Man? 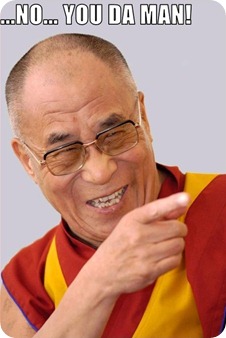 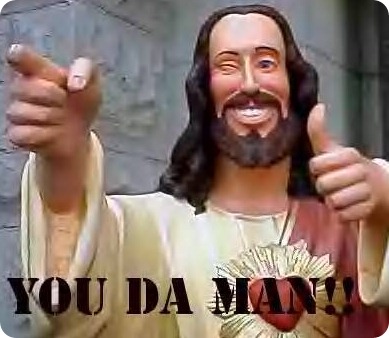 Many of us work to create 3rd Party frameworks in the WP7 ecosystem to be used by other developers. Some work for commercial companies, and others do so just for passion and joy. By inspecting the content of all WP7 marketplace XAPs we can know how many times each assembly is used.

If you’re unfamiliar with any of these frameworks, stop being ignorant and click the link. 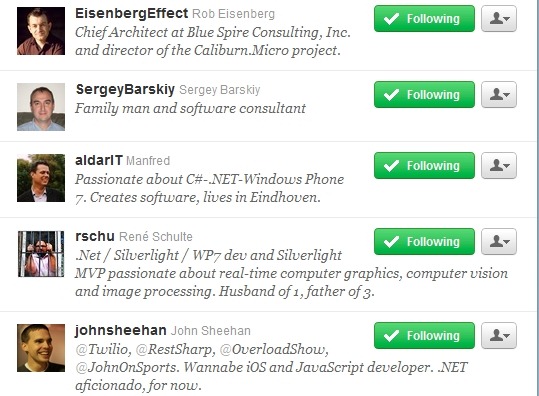 I’ve created a new Twitter list with all the creators of the top WP7 3rd party libraries. Fellow it at @ http://twitter.com/#!/JustinAngel/top-wp7-frameworks-devs

Can I see report breakdowns and the technique used to generate them?

Yes. I’ve posted the reports generated for the entire marketplace, the same reports for top 2,000 WP7 apps and the source code used to generate reports.
If you’ve got a 3rd party framework you can see specific usage numbers in these detailed reports.

Get the reports and analytics source code @ http://JustinAngel.net/storage/WP7MarketplaceAnalysis.zip

No. There are security, legal and piracy implications to sharing data of that granularity.

However, an independent report isn’t meaningful unless it’s potentially corroborated by others. So, If I’m personally acquainted with you (let’s say you’re a Silverlight MVP or someone like that) feel free to ping me and I’ll share all code needed to download the WP7 marketplace and run these reports.  If any such endeavour is ever undertaken up by anyone, I’ll update this blog post.

Can I get a custom statistic?

Yes. Sound off in the comments! I can always generate more informative statistics based on your requests. Don’t be shy, if you have questions I’d love to help out.

Thoughts? Feedback? Feel free to sound off in the comments! I’d love to hear from you folks. 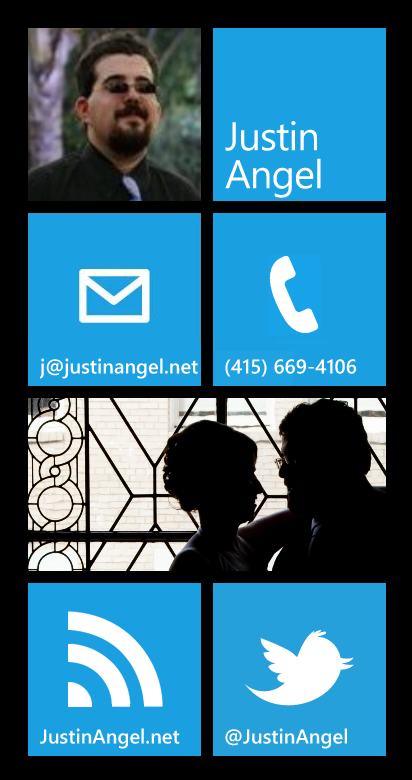